Our travels were to take us next towards Devon where we booked in for three nights at the Lynton campsite on the North coast.

En route we decided to take a look at Stonehenge because we had never seen it and felt that most people, at least once in their lives, have to consider this mystery from close proximity. We set Daisy’s fridge to manual, removed the chocks and let the throttle bring her up to a nifty sixty five (only dropping to 40 on the hills or to annoy the hell out of the locals).

The good news about Stonehenge is that it costs £20 a head to get in!

Yes, you guessed it. English Heritage allows Historic Scotland renewal members to get in for free. 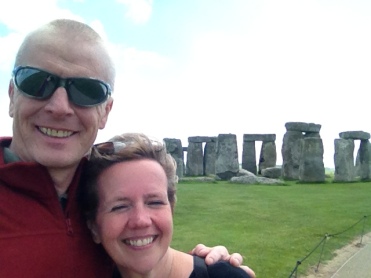 Now we spent over £20 on two scoops of mush called Stone Hot Pot for lunch so it wasn’t that big a saving. We also had a rock cake that looked like it had been baked by Neolithic man.

Stonehenge is an enigma apparently. No-one can fathom why it was built.

More of that later.

When we arrived we noticed there was a small gathering of travellers encamped nearby and two police vans protecting the commercial opportunities this national treasure offers its entrepreneurial owners from them.

Well next Thursday is summer solstice and that is the very best time to sacrifice your youngest daughter, her pet lamb and six chickens from the farm down the road. It is also the case that the fertility of men is increased if they dance naked around the stones – and any child born thereafter will have the power to travel through time.

I don’t think there’s any real mystery to it.

Imagine for a moment you are part of a thriving farming community in Neolithic times. You tend to your crops diligently and you protect yourself from the elements inside a lovely mud hut with an en suite cow shed.

The most important thing in the world to you is to know when to plant crops, when to harvest them and when to start storing up food for the long hard winter nights. You need a calendar.

Now scholars are not averse to the suggestion that Stonehenge (or any other henge for that matter) is a means of noting the time of the year. They are aligned with the longest and shortest days and, at any given time of the year, you could easily go along at sunrise or sunset and get a cracking good estimate of how long you have left before the weather is going to turn cold and you need to get the heating back on for the winter.

‘Ridiculous!’ they say. ‘What about the fact that it took 400 men 14 days to drag just one massive stone 130 miles from Wales? That can’t just be for a clock!’

You need a henge for your community to tell the time of year for all the above reasons. The most obvious solution is to use trees or smaller rocks to build a circle that will indicate the seasons just as well as the massive monoliths we see today.

Well the neighbouring tribes who wander by see some lovely trimmed wood or well selected stones that would do very well as construction materials for their new homes. To hell with the trouble of cutting down our own in the forest! Let’s just snaffle this lot!

And when the villagers challenge the culprits what do they say?

‘Don’t know what you’re on about, squire. Got these trees/stones from the forest myself. You can’t prove it.’

So how do you stop this happening?

Get really, really BIG stones! And ones from so far away that they cannot possibly be mistaken for local ones.

Tough one to deny now!

‘Where did you get that 24 ton, 30 foot high lump of rock you are using to hold up your washing line mate?’

Is it really so hard to imagine that Neolithic man would not be able to pull together 400 men for a few month to build something that won’t be stolen for the next 2500 years? When it is something so important?

Nowadays we are happy to take years to build a large civic facility. How many people does it take to build a new school?

How long is it taking to dual the A9?

We loved Stonehenge, but only at the price we paid. Not sure it was worth £20 to see.

We then headed to Lynton campsite arriving just around 5 p.m.

Being a particularly stunning location we decided to set up our windbreakers outside so we could sit and take in the view.

Unfortunately my wife forgot to pack the mallet.

‘Hold on!’ you cry. At least the women amongst you do.

Now this goes all the way back to Neolithic times too – and is no mystery! When a man marries a woman he enters into a sacred, mutually beneficial arrangement that cannot be broken and should never be misunderstood.

She gets protection from sabre toothed tigers and marauding Vikings and we never ever have to remember to take anything on a trip ever.

Fortunately the man camped next door showed sympathy and lent me his mallet – which his wife had dutifully packed.

Now Lynton village is not too far to walk – but the campsite is at the top of a hill (and a big hill at that) so it takes about half an hour to get there and the rest of the day to get back.

Now its funny how you can brim with confidence heading downhill early in the day – never giving a thought to the return journey. You don’t mind that the owners of a Christian retreat called Lee Abbey allow you to walk half a mile before telling you that you are not religious enough to use their path to the coast and make you turn back. 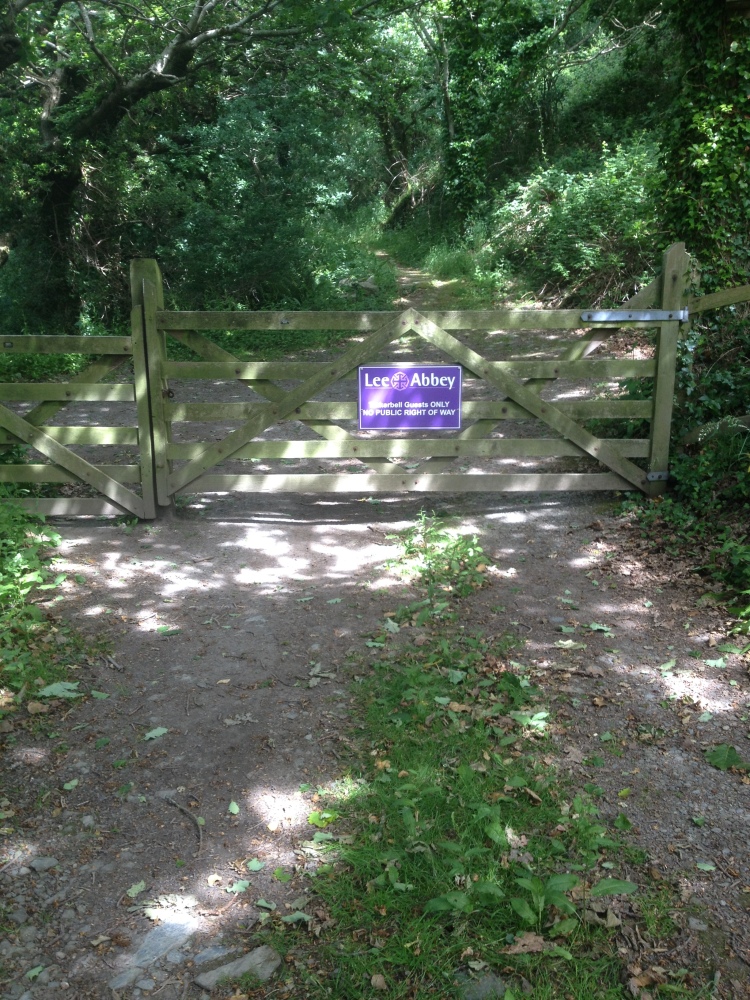 They say the meek shall inherit the earth! The sheep in their field must be praying for the day they can crap in their beds.

And we thought nothing of climbing Castle Rock to view the distant Welsh coast alongside the mountain goats of Devon. 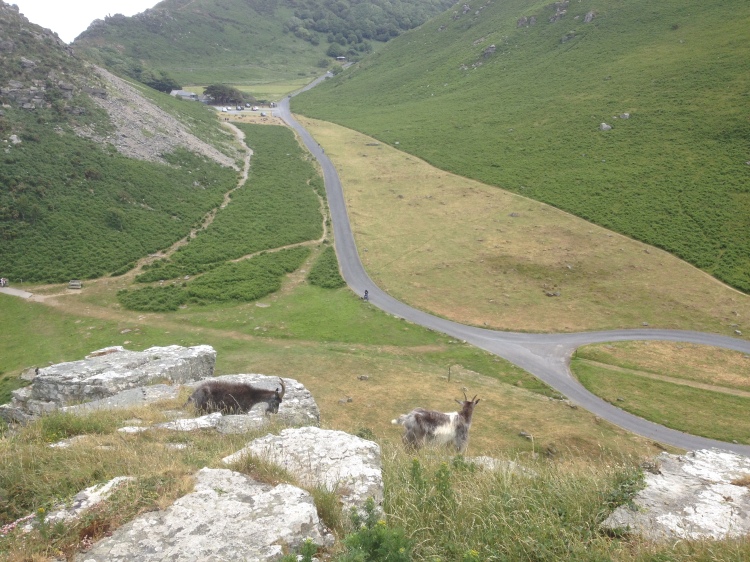 Our first day therefore was spent scaling hills and exploring this hilly little village and its neighbour Lynmouth which is accessed by a unique water powered cliff railway. Very exciting!

The tracks of the Lynton and Lynmouth Railway

Now there is no attempt to be funny here. I love trains. It’s my saddest and most geekiest attribute. There is no electricity or fuel involved here. The two trains are counterbalanced so when one is heavier than the other it comes down while the other goes up. And in order to vary its weight it uses water from the river to fill the tanks of both trains. The bottom train now starts spilling out water making it lighter than the top one which then comes down. It is perfectly engineered and is quite a work of art.

You do worry about getting a burst though. I am sure it has brakes.

Now speaking of works of art, the cream tea at a little cafe called Charlie Fridays is the best we have enjoyed bar none. I have to say, passing the little cafe at the top of the railway, we saw an exceptional looking scone too but we had already demolished a dairy by the time we saw it.

That was lunch – we couldn’t take any more. We shopped a bit and then made our way up the hill for the next three days and nights before taking on oxygen for the final push back to the campsite. Okay, maybe a slight exaggeration. We were home by the evening and fired up the BBQ for some dirty campsite burgers made with almost-out-of-date bargain mince from the local Londis and a side order of Doritos. Best burger of the holiday!

Dirty burger from the campsite

For the next day we planned to take Daisy to the village of Clovelly which so many people have told us is enchanting and a must-see when in Devon. It’s a conservation area, privately owned and (you are not going to believe this) subject to admission fee!

Yes, it costs eight quid to walk into this village which has a single cobbled street winding down to the harbour and a tarmacadam one tucked away in some trees so you don’t know that he locals can get their cars down to the beach.

Now it is lovely! 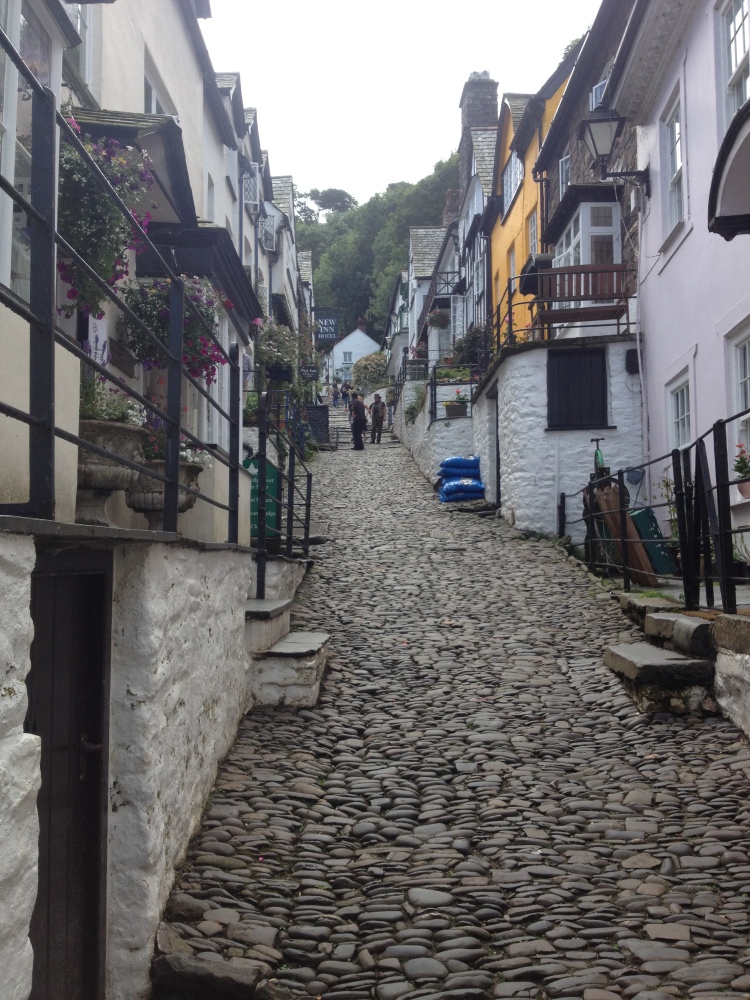 But not 16 quid worth of lovely.

And the ice cream at the harbour was not three fifty worth of anything,

So we went for a dip to make up for the disappointment.

Actual live sketch of us heading into the sea by local Clovelly artist.

Now we also visited Ilfracombe today which is a large seaside town with some lovely views. The most intriguing thing I found here was a Damien Hirst statue at the harbour. 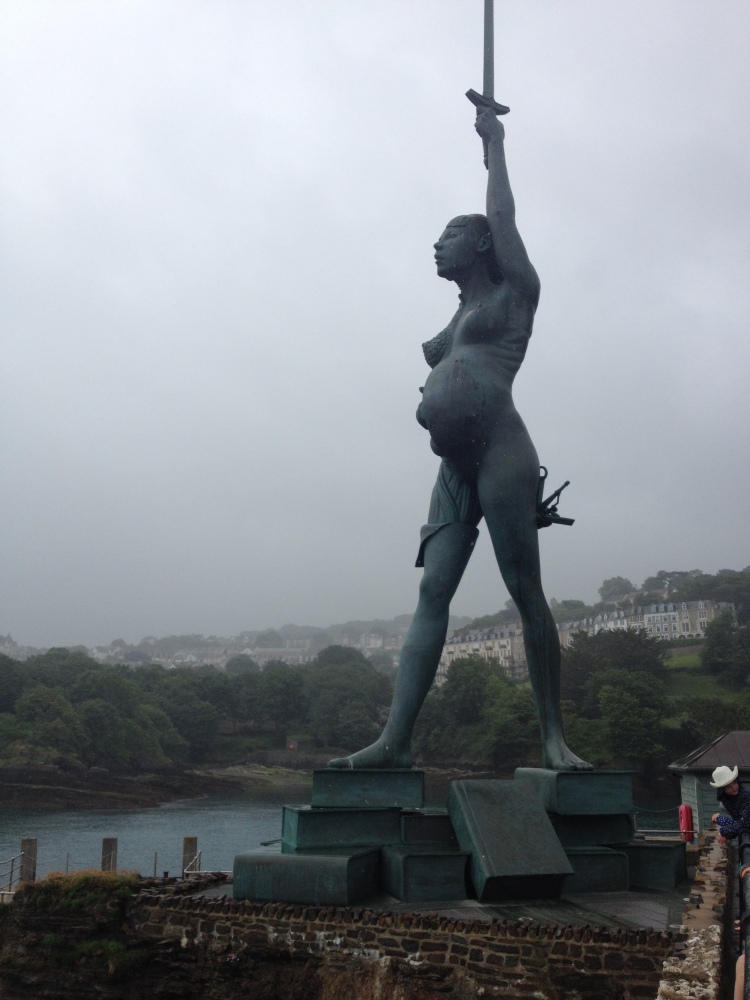 On this side of the statue it is a pregnant woman standing on a pile of law books. She is called Verity.

On the side you cannot see it is the woman with her skin stripped off. I could not photograph it as the section of harbour was locked up. You can see a bit on the leg peeled back.

I think it is fascinating. The locals find it hideous apparently but it is anything but. It is revealing – the truth (Verity) is that we are all pretty hideous with our skin pulled back. We have to get used to that or change our perception of what looks beautiful.

What absolutely looks beautiful is my dinner from tonight.

This was at the Exmoor Manor Hotel and Beggars Roost Restaurant. It was pricey by my standards but this belly of pork was marvellous. We had to walk four miles of hills there and back to get it though!

Tomorrow we head into Cornwall for a long awaited appointment with Rick Stein’s fish and chip shop.

One thought on “Rock Climbing”