The journey to Nashville took just over an hour and we arrived in good time to enjoy most of the day in the city. Unfortunately my unwillingness to part with money forced us to wait for the delayed local service bus which then took well over an hour to find its way through most of Nashville’s lesser desirable areas to Downtown Nashville.

This is when we discovered that our hotel was located – not in Downtown Nashville but in Nearly OutofTown Nashville.

However there was a free shuttle bus service to and from the hotel and you just had to give them a call any time you needed a lift.

Give them a call?

Sadly my unwillingness to part with money meant that we were not equipped with mobile phones that are usable in the USA. We eventually found our way to the Hilton Hotel in town (Downtown), which is where we would have liked to stay, and imposed upon the lovely staff there to call their rival accommodation provider to come get us.

Our hotel is very pleasant though. Just not Downtown pleasant.

We hadn’t eaten much since brunch at the airport – a rather mundane bagel thing with scrambled eggs on it – so were anxious to get to town to find our first burger of the holiday.

Those potatoes were as bad as they look!

When we went to get the shuttle we discovered that the ‘every half hour’ schedule is interpreted by the drivers as ‘any time we can be arsed’ and it was going to be a inordinate delay before we could get into town (Downtown that is). However the valet ordered us an Uber (on the hotel) to take us to Broadway Street where all the Honky Tonks are.

So we mooched about Honky Tonk central listening to some fine music coming out of the bars, marvelling at the fact that these hugely talented people are performing from four in the afternoon whether or not there are people to listen.

We chose Pucketts Grocery for our first burger as I had it on good local authority that this was the burger to eat in Nashville. We walked past the Ryman Theatre which is the home of the Original Grand Ole Opry, and determined to come back for a visit backstage when time permitted.

The queue to get into Pucketts was twenty minutes and we almost decided to go elsewhere. So glad we stuck it out.

I had the Mojo Burger which is their signature meal with baked beans, pulled pork, other stuff I can’t even remember. It was phenomenal. My good lady had the standard burger with extra toppings and it was wonderful too. Fries came with the burger too and, at 12 dollars, that equates to under a tenner per meal for something far, far better than I have ever had in the UK. So good we booked the place for Thursday night when there is live music on too. 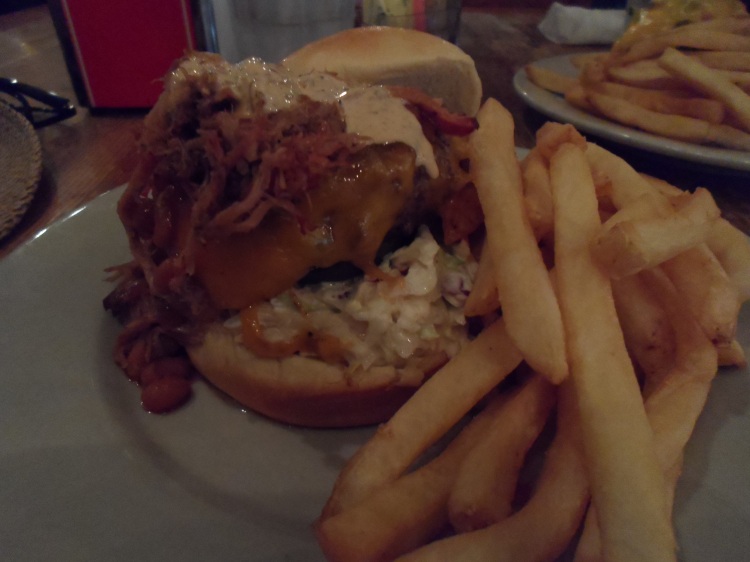 Got my mojo back!

We had dessert too, a pecan sponge thing cooked in a skillet with a blob of ice cream on top. Dear Lord it was sweet!

Now I had been checking the ticket sites for Ice Hockey games for all our locations this holiday but nothing appeared to land right for us. So I was delighted to step out on the street and see hundreds of fans heading to the Bridgestone Arena for a match between the Nashville Predators and the Carolina Hurricanes. We adopted Nashville as our team, headed to the ticket office and grabbed two tickets for 22 dollars each – sitting somewhere in the roof space.

Now sport in the US is something to behold. It’s not like watching football or anything else in the UK, especially not in Scotland. The fans treat it as a game for a start. If they are losing they boo like they were at the Christmas pantomime, but they never throw coins at the ref, fight with the opposing fans, sing songs about religion or political conflicts that are completely unrelated to the sport, and they don’t appear to go home and beat up their partners afterwards (I can only assume the last one).

The spectacle of a sporting event in the US is wonderfully family friendly and wholesome. The kids are showcased dancing to music whenever there is a pause in play, servicemen are honoured by the crowd at half time and everyone follows the cue of the commentator who appears to tell them when to cheer and when to boo.

Anyway Nashville lost 5 to 1 and I felt as though I’d lost an ancient battle with a life-long enemy.

We headed home after that as we had an early start for our Memphis excursion.

At seven am we boarded our minibus with a small group of folks from all over the USA all taking the same pilgrimage to the home of the King of Rock-n’ Roll. It was a three hour drive with one stop for coffee to Graceland where we had VIP tour access to the home of Elvis Presley.

Now I can take or leave Elvis, but my holiday is about tracing the origins of modern popular music and that has to include the man who kick started the whole thing. As John Lennon said; ‘before Elvis there was nothing.’

Graceland is an experience unlike anything else. You could not believe the number of things to see and the four hours we had for it was not enough. The mansion itself is surprisingly small but fascinating to walk through. What you are getting here is a picture of a young man who had nothing and suddenly got everything. We even got a look inside his private jet. It’s completely bizarre to think the extent of his wealth. 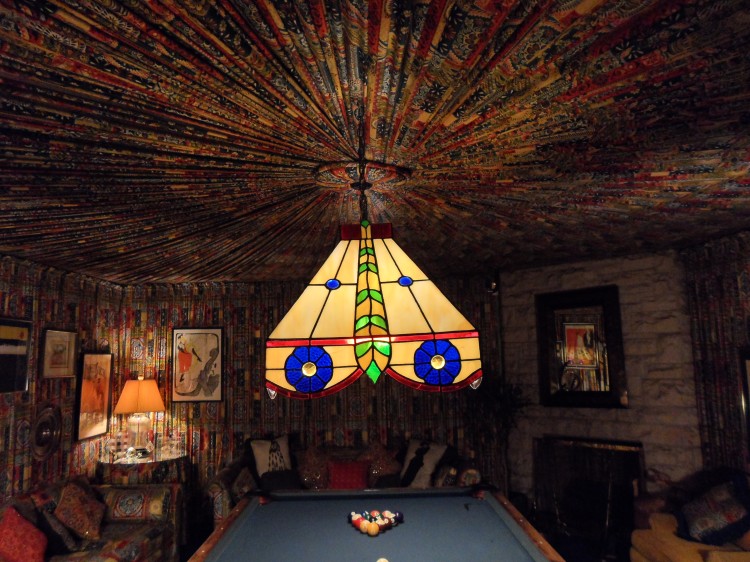 The Pool Room at Graceland

What you don’t get at Graceland is any real sense of his importance as a performer or how influential he was in forming our modern understanding of popular music.

But after Graceland we headed into Downtown Memphis to visit the home of Blues, Beale Street, and then on to Sun Studios where some of the most significant developments were set in motion.

Walking in Beale Street is like walking through a Blues festival. Just as you can listen to amazing jazz on any corner of New Orlean’s French Quarter or to Country Music in Nashville’s Broadway, in Beale Street you hear the most amazing guitar riffs being pounded out at every turn. It’s brilliant.

We ate dinner in Beale Street at a place called Alfred’s. I decided to try Catfish which tasted like … fish, while my dear lady decided to have something a little lighter – just some nachos.

A wee plate of nachos.

If you don’t know much about the history of rock, blues or country – then Sun Studios is wasted on you. But if you realise that Elvis Presley cut his first record ‘That’s all right’ here – that Johnny Cash cut ‘Hey Porter’ and ‘Cry, cry, cry’ here and people like Roy Orbison, Ike Turner, BB King and Jerry Lee Lewis all started out in this small studio – you have to stand in awe at how this tiny location has been pivotal to all that followed.

The tour here costs just 12 dollars and is worth so much more. They have an amplifier on display that belonged to Ike Turner but which was damaged in a car crash on the way to a recording session. When patched up it sounded fuzzy and distorted. That was the birth of distortion for guitar players.

Birth of the fuzz-box right here.

The studio is also still laid out with the markers on the floor for optimal recording. Spots where Elvis stood and where a thousand other artists have stood since

I stood there too.

I’m off to make my first record.

‘You ain’t nuthin but … a complete poser!’

Our trip home was eventful too because we had a tyre blow out around the half way point and had to spend an hour at a gas station waiting for the AAA to come and replace it. I tried to be a hero and help with a roadside repair but the wrench in the van was the wrong size for the nuts on the wheel. The poor driver was quite embarrassed and we will be chasing a partial refund – mainly because I have an unhealthy obsession with holding on to my money – but also because we never got home til midnight and slept in, losing a couple of hours out of our time in this amazing city. 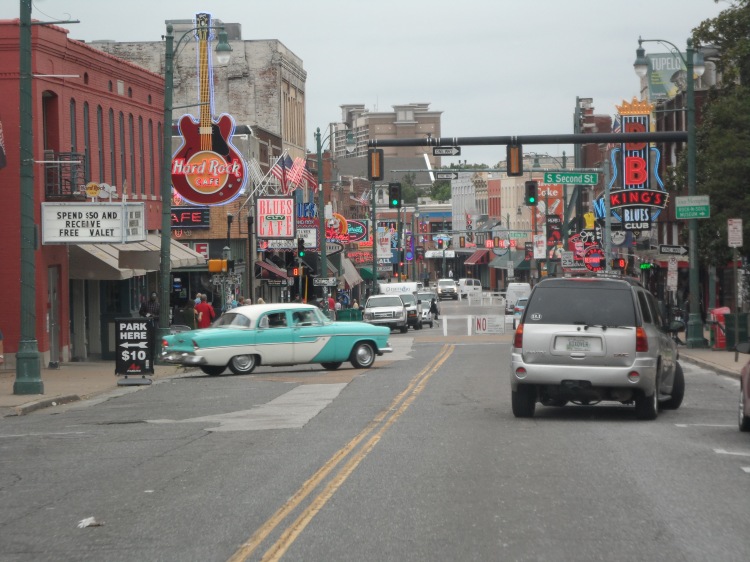 Our driver on the trip to Memphis was Adam Pope – a top bloke from Nashville who only drives the van to keep the wolf from the door until he makes it big with his band. Check him out.

3 thoughts on “Walking in Memphis”