We drove from Kamloops to Vancouver through some of the most horrendous rain I have ever experienced. Yes – even Scotland doesn’t get weather this wet and grey. I have not said too much about the driving on this holiday but, like Route 66 last year, I have usually enjoyed the long stretches of road and the opportunity to dip in and out of the small towns and villages that depend on the road for at least part of their economy. The roads are in good nick over here but there are many miles of single carriageway winding through the mountain areas and both climbing to over 1300 metres and descending finally to the sea in Vancouver Bay. I imagine this is much more enjoyable when the sun is out and the scenery can be appreciated. For us – 50 shades of grey didn’t give us the thrills we were told it would (maybe we misunderstood the reference?).

That ‘shades of grey’ reference is a subtle (and clever I would suggest) reference to the fact that the book and movie of that name are set in Vancouver.Now I know absolutely nothing about either other than the fact that the book turned a mediocre author into a multi-million earning best seller almost overnight. The secret of her success was delivering sado-masochistic soft-porn to the masses under the guise of romantic fiction. Or at least that’s what I am told!

Now I discovered this fact after researching the internet to try and find out what Vancouver is actually all about. It’s a very vibrant city, it has a stunning park (Stanley Park) which is bigger than New York’s Central Park, it has a huge harbour area with leisure and commercial craft (of all sizes) both served, there is a terrific football stadium and ice-hockey venue, it attracts the great and the good – and there is no denying the beauty of the place.

But I still don’t get it. And I will explain  – later.

When we arrived yesterday we dropped off our bags and returned the hire car (we have to bus it over the border). After that we returned to the hotel to log on and get some ideas for dinner and to suss out the tickets for the trolley bus system. Knowing nothing about the city we wanted to ‘get the tour’ to unlock the mystery of the place. It’s an expensive way to go but in other cities I have found it gets you straight to the key sights and offers a little bit of local knowledge to boot.

We had already decided that for Vancouver, Seattle and San Francisco we would take this approach and we researched the two companies in town promising to ‘take us straight to the heart of the city’. While idly surfing the various vendors looking for cheap prices I drifted over to an old favourite stubhub.com looking for a bargain. I also thought I might secure some hockey tickets but it turned out the Vancouver Canucks were not at their home Rogers Stadium. Instead that legend of Country and Western music, one shade of blond, Dolly Parton was in town. 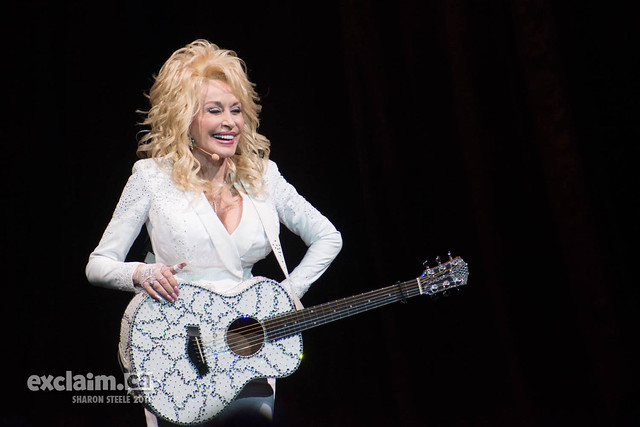 So that’s how we spent our first evening in Vancouver – ‘Working 9 to 5’.

Bur before we did that ‘Two Doors Down’ we had some food at the Old Spaghetti Factory’s home in Gastown. This is one of Vancouver’s ‘cool’ areas and, having discovered this restaurant chain in Banff, we enjoyed our grub again.

Up at the crack of half eight-ish, our heads still buzzing with the sounds of the rhinestone Queen, we headed straight out for breakfast at Cora – right next door to our hotel and ate ourselves silly. It was delicious – but priced appropriately. We were not getting a bargain in Vancouver.

Jumping on to the trolley bus we sat waiting for the guide to enlighten us. What makes Vancouver tick? Why do Canadians come in their droves to this remote end of the country? What sights are we about to marvel at?

The Lionsgate Bridge – being blue and not Golden.

A clock powered by steam.

Some shops you can get anywhere.

And that really big park.

Oh come on! There’s surely more to it than that?!

In reality, Vancouver doesn’t have a Tower of London or an Empire State Building. It just doesn’t have any age to it. The oldest building is about 100 years old with most of them less than 30. I have socks closing in on that age.

It is probably quite sad that we love places like New York and Los Angeles just because we have seen them in movies. For those of us who have not seen 50 Shades of Grey, the scenery is alien to us. Yes it turns out a superhero film called ‘Deadpool’ was also filmed here but who over the age of twelve has bothered to see that?

This website details quite a lot of films that have been made in Vancouver. Most of them, apart from the 50 Shades one, were filmed but not ‘set’ in Vancouver. I think that is part of the problem.

So in the absence of  internationally understood history (movie or otherwise) – Vancouver can’t present you with a famous or infamous anything really. There’s no depth to the culture. It is too recently fabricated.

As part of our tour we took a short boat ride to Granville Island where (given the name) we would have loved to have seen a replica of the ‘Open all Hours’ shop. But Vancouver doesn’t have a Ronnie Barker or a David Jason – it has Ryan Reynolds. Instead we had a little village of local craft shops which were very charming – and very expensive. We got our lunch at a bakery called Stuarts – a maple syrup cheesecake – which was delicious.

After that we re-boarded the trolley bus with a guide who was more cynical about Vancouver than I was! Passing the new condo developments on the river-side he rued the day they tore out all the wonderful wild-berry trees to erect these monstrous and over-priced towers. Seeing teenagers performing amazing tricks on their skateboards under the highway he tutted and said they were ‘competing to be the first into hospital’. One of Vancouver’s genuine highlights – the massive Cedar trees – was pointed out by our dry-witted driver. ‘They call that art’ he said of the five cars stacked on top of a huge stump in the middle of town. It was the best thing we’d seen so far! At least it was interesting. The ‘almost a hundred years old’ building now housing a burger restaurant was crap by comparison but he stopped to allow us to photograph that!

At the end of the tour we returned to walk in the park and then to make our way down to the football stadium for dinner at Boston Pizza.

Dinner was very good here and I enjoyed the fact that the USA and Canada hockey game was on large screen in the restaurant. Apart from the hockey it was not as a good as Asda’s build-your-own pizza and cost ten times more. But that’s eating out in Vancouver for you. They don’t have Asda.

So -this is our last night in Canada and instead of stepping out into the vibrant city streets of Vancouver I am sitting writing this blog. I still don’t get this city – and have to admit that probably says more about me than it does about the place which has everything going for it. If I had seen the 50 shades film and had enjoyed ‘the scene when Christian Grey jogged along the seawall’ – I could have done that too and connected with the city. I didn’t though – and since I will not be seeing it (or Deadpool for that matter) I have no prior or future relationship with Vancouver. I’m glad I came but equally happy to sit here waiting to set off for a new adventure in the morning.